1 Comment
learning to live, on, Series: Signs of the Kingdom, what they are teaching me

a kind of rumbling

It wasn’t at all that there were a few other languages loud enough to notice, but English was still the loudest. There was no prevailing language; the rhythm of the words held the group of roughly thirty together as much, I suppose, as the gathering just after seven for Eucharist held us together. I’m glad the words are now, after all these years, buried somewhere deep inside me. Otherwise the thin layer of contact-floating tears would have made it impossible to read them. Still it was nearly impossible for me to speak them.

With my awareness of Pentecost still keyed up, whatever it means and whatever I’ve made it mean, I heard the phrase in multiple languages said together so that it spun into a kind of rumbling made familiar by rhythm. I got the phrase uttered, and then had to stop again only to listen. The language to my right was different from that to my left. Neither was the same as mine.

To lean into the rhythm, celebrate the diversity, and dare for the gritty risk of kingdom on earth outside the doors of the cathedral after final thanks and hallelujahs…we might, then, sense the same kind of rumbling being spun in the streets.

Tagged cape town, desmond tutu, matthew 6, our father, pentecost, rumbling, st george cathedral, the lord's prayer
2 Comments
learning to live, on, what they are teaching me

worth more than a lazy saturday

I won’t lie. To all my friends with children, jobs that carry them into the weekend, life that carries them over the edge…I wont lie. I usually sleep in on Saturdays. If I’m in town, which is becoming less and less, I don’t think twice about the thrill of sleeping in till nine or ten on Saturday mornings, waking up then only because the dogs begin to insist on it. And I wont lie that most Saturday mornings it’s the perfect thing for me to do.

Be jealous, if you wish.

Today, however, is worth more jealousy than sleeping-in-Saturdays.

This morning at eight I’m ringing the doorbell to meet for a few hours and discuss the art of counseling, to be given encouragement in y wise steps and wisdom in my ignorant steps. And coffee. To be given coffee at eight in the morning since I usually sleep in on Saturday mornings. For two and a half hours beginning at eight in the morning there is discussion over what it means to listen well, to practice well, to watch well and to craft well. Counseling is, as I’m learning, more the art of listening for what the person speaking has known all along but can’t hear himself say, can’t hear herself know. until someone shines it back on them, both sides becoming changed. This morning at eight in the morning, cup of coffee soon to be in hand, I’m ringing the doorbell ready to discuss the art and privilege of therapy.

This morning at ten-thirty, or a few minutes late because the first conversation went long…but we knew that it would…I find myself walking through another door to another meeting. I find myself, new cup of coffee in hand sitting around a huge kitchen table with people I know and people I don’t know. I find myself sitting with people who share, above all, a heart not for names or labels or agendas but a heart for the kingdom and all it involves. I find myself sitting, a little late for a ten-thirty meeting, around a table with people who have won my respect and people who quickly earned it talking big and thinking hard and dreaming wide about what it means for business and food and health and poverty and community to get smushed together in one hopeful spot. Passing the brownies, the hope of a community sitting around tables together having a party as we were this morning. This morning a few minutes after ten-thirty I find myself in the middle of a moment I wont soon forget because a little piece of kingdom come happened around that table this morning while brownies were being passed.

And at twelve forty-five I find myself sitting across the booth from a good friend for late lunch. Laughter and hats and glasses and jeans because it’s Saturday morning after all. The questions thrown out over salads and salmon about what it might mean to follow Jesus beyond harmful clichés or ceramic crosses and into the streets and the cubicles and the living rooms where vengeance is king and jealousy rages and a feeling like maybe we’re a little behind pushes fast and furious into our hearts. Passing the crackers and stacking the napkins, questions thrown out about where we went wrong or where we went right and how we might learn to tell the difference between the two, how we might assume there’s a difference at all. Back to our cars and back to our homes for errands and work and a little time for play, because it’s Saturday afternoon of course.

And then in the evening, a last minute text. Dinner around the table, prepared as we chat. Children run wildly with giggles and stories and hopeful surprises of what it mean to see their eyes and takes on the world. Sitting down in those familiar seats we find ourselves between laughter and tears because so much is known and so much has been seen. Together. There’s no catching up so only the present is told: where we are, what we wonder and what we all hope. Sweats and pullovers, secrets unhidden, because after all it’s a lazy Saturday evening dinner.

And so most Saturdays I don’t think twice, when I can, to sleep late and give thanks that I have the weekend. But today, in the hustle and the few minutes late, I give thanks that I’m surrounded by people pushing well and pushing hard and pushing often into the thin space where we’ve been taught to pray and taught what it means for his kingdom to come and his will to be done on this dusty earth now as it is in his heaven. 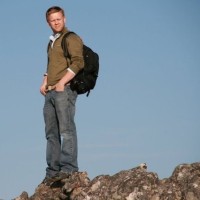