Leave a comment
learning to live, on, Series: Signs of the Kingdom, what they are teaching me

Several weeks ago it was at a greenhouse under the South African sun. It was with two friends, one from South Africa and one from England, both in Cape Town now chasing the kingdom hard and fast. One works to transform the way housing is addressed for those living in informal settlements by way of valuing inherent wisdom, skill and reality. The other is working to address issues of gang violence, trauma, and youth development not only in Cape Town but in the hearts and plans of those around the world.

A few weeks later, it was in Nashville, Tennessee. We were talking about whether hot chicken was hot enough or too hot as we prepared for a wedding a few hours later. Friends without the pretense of worry of doing it right or doing it fancy, it was a celebration of choosing to do it and do it together. Friends willing to push through the new uncertainty of what it means to be a community surrounding those who are choosing to do life together. Friends who will argue over the heat of Nashville’s hot chicken in the morning, pretend not to cry at a lifelong commitment in the afternoon, and dance like no one knows what dancing is supposed to look like in the evening.

And this week, like last week, and like the other weeks in between was at the altar rail at a little church on the north side of town. Hands out, breath held, eyes up, it all swelled together. I’ve heard my priest and favorite friend say before that when we kneel at the rail, we share in communion with those with us in that moment, those who are gather at Christ’s table around the globe, and those who have both joined the table in centuries past as well as those who will come after us with the same assurances and the same uncertainties as we knelt at the rail today.

This morning, hands out, I joined them. I joined my brothers and sisters in Cape Town. I joined my sisters and brothers over hot chicken in Nashville. I joined my own local church community, and all those who were at their own churches both in my own city and in cities around the globe and through the ages.

I’ll work toward justice tomorrow and push against institutional power and greed.
I’ll seek beauty and laughter and silliness tomorrow with adults who hate it and children who love it.
I’ll do paperwork and billing tomorrow and wonder what I’m doing and why I care.
I’ll push a few steps forward into and few steps back from the kingdom of God.

And I’ll only be able to do anything at all tomorrow by the mystery of
the power that somehow shakes the rail every time I kneel,
whether at a nursery in Cape Town
or over hot chicken in Nashville
or the altar at my little church.

Here I am in an empty church. In it, between the rows of pews, on the tile floor, under the silent cross, I walk along a boundary, a place in between heaven and earth. The Celts called it thin space….The church calendar calls into consciousness the existence of a world uninhabited by efficiency, a world filled with the excessiveness of saints, ashes, smoke, fire; it fills my heart with both dread and hope. It tells of journeys and mysteries, things “seen and unseen,” the world of the almost known. It dreams impossibilities: a sea divided in two, five thousand fed by a loaf and two fishes, a man raised from the dead.

It seemed as though every few breaths had to be wrestled quietly to keep exhales from becoming tears. I don’t think tears of any kind of sadness, although some seem wrapped together with a letting go of things that no longer fit but were desperately and perfectly holy when they once did. Others pregnant with promises that are only clear today after all this time of begging for clarity. Others coated in laughter of flying monkeys and brave children.

After being on the road––or in the air––for nearly a month, I returned to the desks and sessions and meetings and paperwork and conference calls of the work week last Monday. With the promise of daylight savings time still a terribly long week away, I traveled back from exhilarating speaking and learning with stellar servants in Seattle and Memphis and the slow and holy days of the beach with lifelong and new friends, to the pounding of alarms in the still-dark mornings of my own still room.

The threat would be, of course, that the magic only happens when things are outside of the routine. Only with toes buried in the sand and waves ruining the back pages of novels do we cross into the thin spaces. Only with lecture halls and presentations and learning credits pending do we feel the rush of the practice and the theory. Only with the frantic boarding runs do we surmise that we are living something exciting.

But then, on a Monday morning as regular as any other, the shower makes us look a little more alive than we feel, the coffee makes us a little friendlier in a few short moments, and the first meeting, the first client, the first conference call reminds us that we love what we do and the people we get to do it with.

And the thin space becomes so thick we can taste it and name it and break it as if it were in itself that holy meal.

So today, a week later, with more travel on the edge of the next few days, I’m giving thanks for a week of clients, a week of paperwork, a week of surprise parties and the lies they require, a week of out of town guests and in town friends over drinks.

So today, a week later, I find myself at the altar, imagining that table that spreads all the way to family in Nicaragua and all the way to family in Cape Town, and all the way to family who have already moved a little closer to something better on the other side of time, and I was wrestling breaths in order to exhale without bursting into tears. Tears of letting go and holding on. Tears of the promise that I have no idea what I’m doing, but somehow I feel alive while I’m doing it and I feel loved getting to do it with such incredible people, and I feel honored doing in on behalf of those so often not welcomed at the table.

So today, a week later, I find myself at the altar recognizing that the thin space has become so thick at this particular moment in time, that I let it win and with the tears that hit the hands that hold the bread and the wine, I give thanks that he withholds no good thing from us.

protest at the table

Even though I’ve heard it repeated, the story is told regularly and goes like this:

Donald, roughly 3-5 years old sitting at the kitchen table during family dinner. I see a booster seat need based on my age.
Mom: Donald, you have to eat your brussel sprouts before you can get up from the table.
Donald: I don’t like them.
Mom: Well, you’re going to have to eat them before you get up from the table. I don’t think you’ve ever tried them before.
Donald: I don’t like them. I’m not going to eat them.
Dad: You will sit right there until you eat them. Conversation over.
While usually allowed to disagree, the “conversation over” card means be quiet or else. To speak is bad news.

The story apparently plays out that I sit at the table, refusing to eat my brussel sprouts, (I imaging a cigarette in mouth and newspaper in hand, but it’s likely that I went between whining and being way to cool to make eye contact for the next SEVERAL HOURS. I ultimately refused to eat the brussel sprouts (a food I now love), and sat at the table, triumphant, got a spanking, triumphant, and went to bed, crying…..and triumphant.

I’m sure churches there, like churches here, continue to worry about issues of childcare and women in leadership and politics and budgets and music styles and whatever else occupies time. And still, Christians there, like Christians here, are finding themselves standing in the spaces where lives have been lost, injustice smells like dried blood and spent gunpowder, and are wondering what it means to follow Christ.

And there’s something valuable in ways that transcend time and space about protesting at the table.
Friends in Manenberg serve soup on the very same pavement and dirt spaces where lives have been lost and chalk outlines could have washed out by now. The value of a meal shared together overcomes the injustice and lack of shalom that leads to violence in the streets in Manenberg, and in Jackson, and in Nicaragua, and around the globe.

And so a group of believers end up deciding that while the believe in the hard facts of guns and gunfire and bullets and death and blood and chalk outlines, they believe something about the table to be healing and to be hope calling and hope inducing, so they serve soup in the very spaces where lives have been lost.

And they proclaim that Christ is king and kingdom comes. Ultimately. Always.

But the space at the table is a space of shared protest, promise, and therefore hope.

His kingdom come
His will be done
On earth as in heaven.

Who knows how.
We pray not knowing how to pray.
And the table becomes a place of protest.
And kingdom comes.

to those people, and you know who you are 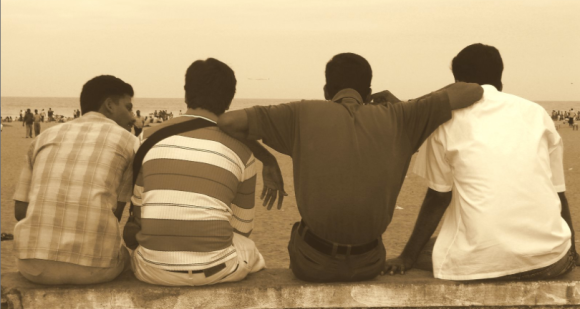 to those people
who make it okay to stumble out in the morning
with hair twisted in all the wrong ways
eyes stuck together
and thoughts jumbled up
still to say, “good morning.”

to those people
who have become the safe, honest and free places
to make it clear who I am not yet
and also who I desperately hope to be
until all is said and done
you will offer the clearest notion
of what it means to be loved well.

so to those people
and you know who you are
who offer homes and spaces of
safety and honesty and freedom,