5 Comments
grief and trauma, learning to live, on, social work, what they are teaching me 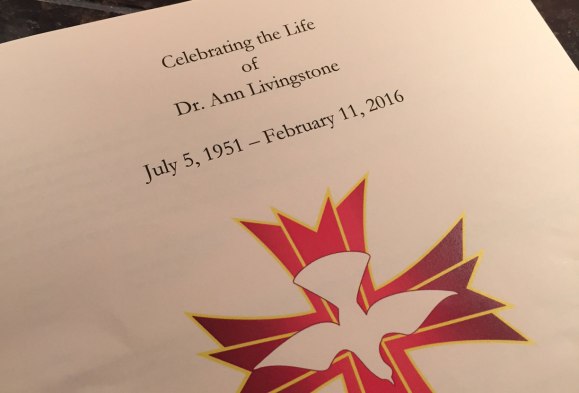 I watched my own mother file in, first in line of the four women. The two directly behind her I know well and have a heavy respect for as game-changers, rule-writers, integrity-definers, and culture-forgers. The fourth I’ve never met in person and somehow now in this moment feel embarrassed because I know her name and legacy well. These four women together are the honorary pallbearers for Ann Livingstone today, a funeral that is unwelcome and too early for her lifetime and her influence in our own. They are each dressed in black, of course, as they filed in St. Luke’s historic building, but with a sharp and intentional splash of red as Ann had instructed.

I picked up flowers later that afternoon for the tables and counters and surfaces at Mom and Dad’s house later that night. I was looking for all white blooms, and then remembered the instruction for a punch of red. So all white was chosen, and a punch of red per Ann’s request. A southern dinner for family and friends, and in Ann’s case…students, was held at Mom and Dad’s house the evening of the funeral.

The door I came home late through nearly two decades ago as a teenager I was now opening to one-time students who had become Ann’s students either officially in a classroom or practically in the world because she instilled in them this deep longing to work excellently and brilliantly and faithfully and daringly in their respective fields, whether political science or peacemaking or religion or community development or justice or healthcare or human rights. They were arriving on our from porch from California and Canada to who knows where paying respects and mourning the reality that Ann was now, whether she wanted to or not, offering the ultimate assignment: taking on the work that had now been stolen from her far too soon.

A few days ago, a good friend of mine posted online an image of our high school English Lit teacher Lisa Kee. She was too crazy to categorize, and too sincere to discount. She was diagnosed with cancer before our eyes as we watched from the desks in her classroom. She proceeded to teach us new ways of being honest with our own humanity, our own fears, our own faith, and our own responsibilities to read and write. She instilled in us the responsibility that by doing so we were shaping the world around us. She told us about the horror of waking up to baldness because of chemo, the value of fresh air and moon beams when you’re trapped in a sterile hospital room, and the fear of knowing that death is closer than it had been invited.

For me, and for many, she was the first person who ever made it clear that my voice was worth using and worth being heard, and therefore worth being trained and challenged because our shared humanity was at stake.

When Mrs. Kee died, her funeral was the biggest of any class reunion I’ve ever been to. To invoke her name shapes the conversation that follows, and raises the bar of what we expect among each of us. Ann was never my professor, but I’m the recipient of those she taught, both officially as students who are now my friends and colleagues, and unofficially as friends, like my parents, who have been shaped and challenged and pushed to live wholeheartedly because of what she has taught them.

But shots of red, unexpected and insistent fugues, the filing in of these four pallbearers, and images of the past wrestle hard against it, fighting honorably against grief in making way to the surface insisting the work must continue. To live with honesty, teach with integrity and urgency, and die with dignity are a sharp lesson and challenge.

And in the loss of our larger-than-life teachers who have now been stolen by the fight, we find ourselves pushing a little harder to pass on the imperative of living in ways that are worthy of the human spirit.

To Lisa Kee and to Ann Livingstone, I will do my best. And I will push my students with all I have to do their bests.

There comes a split second in the middle of whatever I’m doing where I realize, somehow, that space

and time
and passion
and gut
and possibility
and awareness
and weight
and responsibility
and value
and importance crash in on one another in the middle of what would otherwise be a regular day or a regular moment at work, in work, while working.

Tuesday I stood in front of a group of students who I’ve slowly been getting to know, pointed partly to the screen behind me, projector light across half my face revealing an obvious typo in my otherwise regular presentation. My hands are in the air, my mind is on a person who once sat in my counseling office, and my words are coming out as an imperative I once made fun of a past professor for saying all the time.

Students are half-confused, half still waking up, half-engaged, and some hopefully teeming with the thought they could actually change the course of history in doing excellent work with human beings.

A few hours later, after grading quickly and pouring in caffeine, I’m standing in the same spot with a different group. I find myself reading through a poem about the people who have come before us and challenged everything we think we know about who deserves to be treated like a human being. And I almost lost my composure for a moment.

And then last Wednesday, looking people in the face and listening to them tell me about their perseverance and their hopefulness when everything tells them there’s no reason to keep fighting, I realize I’m in some kind of sacred space where humanity crashes into reality and brings clarity for a split second before exploding back into chaos and confusion once again.

Listening to a man the same age and race and history as my grandfathers, were they still speaking wisdom over me in the flesh, saying with tears in his eyes and a knot in his throat,

“Brotherhood & sisterhood
among people of all kinds
is not so wild and crazy a dream
as the people who
profit from postponing it
would have you believe.” – B. Zellner

He was once in the KKK, as was his pastor father. But he joined the freedom riders and was pulled bleeding across the street with his black brothers and sisters, many of whom were killed.

And listening to him tell his story and say these words in front of me as I watch my students sit beside and around me, with lives of social work and beloved-community bringing and rule-breaking completely ahead of them

Driving home from sitting with a friend at another board meeting where numbers and spreadsheets and arguments and committee reports are ultimately about people getting the care and support and dignity they deserve because they are human beings.

It’s then that something clicks and says it’s worth being so tired and so ready for bed if it means that people are treated like the human beings they actually are. It must be. It’s not groundbreaking, but it’s so elusive.

And it doesn’t happen every day, every time, every meeting.

on days when it happens

but mostly on days when it doesn’t

My fingers have been afraid to push down on these keys. I’m not sure what I have to say or whether it’s worth saying. I’ve been in the world of everyone else, fighting to make sense of the day to day and hoping that every now and then something of meaning squeezes out of it. Paperwork is usually late, dinners are cut short, stories aren’t completely told. And while I feel like I almost have something to write, it seems like it’s a little short of worthwhile.

But in each of those moments, I still know something magical has happened. I’ve met a buddy for a beer or a friend for a coffee. We’ve eaten too many chips in queso or had too many mozzarella sticks. But we’ve been offering rounds of “me too” and “yes, exactly” in the meantime. We share the same anger at the same institutions, the same grieving around the same situations, and the same hopefulness toward the same possibilities.

And it leaves me wondering if it’s not worthwhile moments I’m waiting on to write about, but perhaps I have forgotten what moments are worthwhile after all.

So, fingers to the keys and eyes on the horizon. I’m doing my best to pay attention. At least, that’s what I intend to do.

We were sitting around a table spread with pads, pens and leftovers a few feet off of Beale Street in Memphis. We had a two-day staff retreat for Area Relief Ministries, and we were closing up our time together with some overarching reflections on our different ministry areas, what we were seeing and feeling, and where we wanted to go in the days ahead.

Having been through the National Civil Rights Museum together, a staff of half women and half men, half black and half white, we were reflecting on our own experiences and those of the people we serve every day at ARM.  One of our staffers, Vakendall, started talk-praying in a kind of musical tone that he often speaks in; what came out of his mouth has been lingering in my head since then.

In reference to the photos and pictures throughout the Civil Rights Museum of men and women standing up to oppression, racism and violence with a kind of sharp meekness seldom see, Kendall asked, “Who told them they were somebody?”

As I think of the people who walk through the doors at Area Relief, the kids who show up at The HUB Club for tutoring and mentoring in the afternoon, the clients that sit in my office at Pathways fighting bravely against all shades of mental illness, I am now wondering who is telling them they are somebody.

Churches often get swallowed up in the business of deciding who is and who is not…somebody.

There seems to be a task at hand, a responsibility and a privilege bundled up together the moment eye contact is made with another. Just as we hope to be bearers of a holy image, we feel a call to look another in the eyes, reach down deeply, and speak of their somebodyness.

The people not in those photos at the Civil Rights Museum were likely their teachers, neighbors, postal carriers––maybe if we are lucky, even their pastors––the women and men who made it clear over and over again that they were somebodies. People who were made to be kings and queens, even if nothing else in the world at that moment suggests that is anywhere near the truth.

I’ll be more satisfied if I ever end up not being the person who speaks at the pedestal for the world to hear, but rather the one who told him or her that she was somebody. 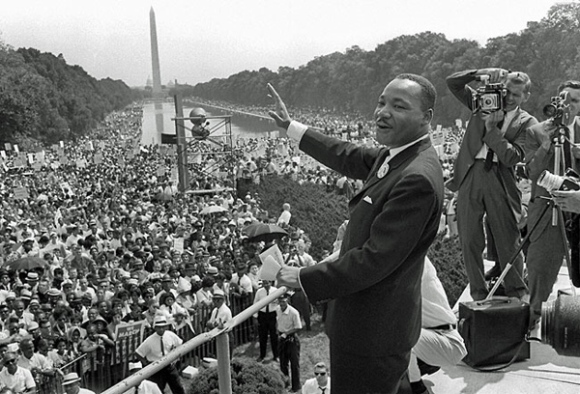